In an 8-5 vote at a meeting, these are the Councillors who all voted against adopting the council’s 10-year strategy for 2021-2031 – citing a variety of different criticisms of the plan (although they were OUTVOTED…):

Their concerns were over council spending, increases in rates and a lack of a transformational vision for the city.

The council has proposed “a reorientation of our social funding” to reduce social isolation, housing vulnerability and poverty to help in the social recovery of the region, and has bumped up its capital works programme to boost employment.

That programme, among other expected expenses over the next 10 years, is projected to have a significant effect on the council’s debt levels. By 2031, debt is projected to be $291 million.

The works will be fulfilling another of the eight key highlights – infrastructure renewal. The proposal in the LTP is for the council to invest $491m on “essential infrastructure” such as transport, water supply, wastewater and flood protection.

Community facilities and partnerships are identified as another of the key issues, including a proposed sea sports building at the Nelson Marina, costed at $8.3m, and the somewhat grim prospect of finding new cemetery space, as existing cemeteries are expected to run out of burial room in the next 10 to 20 years.

The major highlight in this issue, however, is the proposed $44 million Riverside library project. 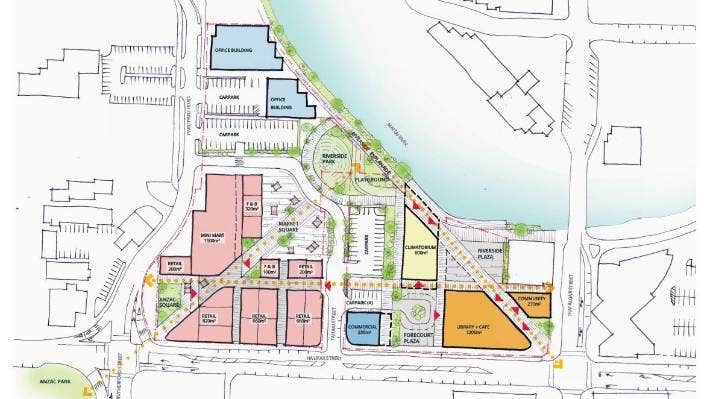 The city centre itself is also a key issue where the council is proposing an investment of $15.3m over the next 10 years. Exact allocation of that budget is yet to be determined, but one project on the books is an “urban park”, priced at $1.4m, and the ongoing Streets for People programme at $2.7m. (Yes, MILLIONS not thousands..)

While flood protection comes under the purview of the infrastructure plans, other responses to potential effects from climate change such as increased frequency of extreme weather events and potential flooding or inundation have not been laid out in the LTP.

Instead, the LTP has a budget of $52m for responding to climate change, with plans to engage with the community on the “options and costs for development and implementation of a Climate Change Adaptation Framework”.

The next of the big eight issues, environment, will have its own proposed budgets separate from the climate change, including an $11.5m fund exclusively for a “comprehensive weed control programme”.

Last but not least comes the council’s response to the housing crisis. The council’s proposed response is to “continue to work with others” such as Kāinga Ora, the private sector and community housing providers, while planning for a more compact, intensified urban living environment supported by council infrastructure.” (our comment: – WHOAH– “continue to work with others, while planning…”  – more sidestepping… can we have some actual specifics here…??  We wish…)

“This is a Long Term Plan with your wellbeing and Nelson’s future at its heart.

We live in an extraordinary location, a Smart Little City that celebrates the contributions of a resilient, creative, and diverse community. However, the last few years have brought a range of challenges that have tested our mental and physical health; cyclones, forest fires, and COVID-19. Each has impacted Nelson’s social, economic, cultural, and environmental wellbeing and changed the lives of many.

That is why we have chosen to focus on wellbeing when developing our Plan for the next 10 years. Your wellbeing is a factor that runs through all of the proposals that you will read about in the pages ahead….

We want to be a good partner to the many organisations we work alongside and support. We must also be guided by the concept of Tūpuna Pono (being good ancestors) and have tomorrow in mind when we decide how to act today.

The Plan sets out a vision for our City and where we want to be in 10 years. We have listened to the feedback you have given us through previous Annual Plans and pre-engagement and have tried to include the things you have told us are important to you in this Plan. However, we also need to consider rates affordability and debt levels, so some of the things you have asked for have not been possible to include or are occurring in later years.

The consistent messages we have heard include; providing support to alleviate the housing crisis, taking proactive action on climate change, providing improved facilities, and continuing our work to ensure our core infrastructure is resilient and meets growing demand. You asked us to revitalise our City Centre, care for our environment and encourage employment in our region in the wake of COVID-19.

We believe that the Plan reflects those messages. Have we got it right? If not, what do you want to see change?”

From Neighbourly, by Jean Edwards

Double-speak
Hmm I just reread parts of the Long Term Plan again, in today’s STUFF. I wish Council would use ordinary language and not this double-speak. I consider myself a fairly intelligent woman, yet it took me a minute or two to extract the REAL meaning behind this clever bit of verbal manipulation – my comments/translation in square brackets like these [ ] .

Apologies for the length: it took this to translate what the mayor’s statement really means:

“We will need to increase Council’s revenue from rates to deliver the Long Term Plan [so OK, let’s definitely change the Long term Plan!].

Rates rises are expected to be between 5.0% and 5.7% per year over the 10 years of the Long Term Plan. This will enable us to achieve the outcomes that you have told us are important to you… [WAIT- we don’t expect ALL of these things to be implemented- AND you’re adding on extras such as the library complex just for starters], and deliver the core services we need to provide as a unitary authority (a council which has the responsibilities of both a regional and district council). At the end of the 10 years our net debt will be $291 million, and our debt/revenue ratio will be 143%.

“A benefit of this approach is that although our debt will increase, it will be less than what it would be if rates were set at a lower level.”

[What?? Whaddya?? So you mean, Great- we’ll have a smaller debt than we could have had. But WAIT A MINUTE- this really means we’ll actually have LOTS MORE debt than we have now because of all the proposed spending. And – um-  it would be a bigger debt if we were stupid enough to STILL do all of these extravagant plans but didn’t increase rates. WOW. So, simple: revise this extravagant Long Term Plan, Council…

And ask for and listen to and act based on residents’ input.]

Like to become a member? We’d love to see you- we’re a friendly bunch!

Of course you don’t HAVE to come to meetings, you can just support us financially:

At the moment we need you to please make an online bank transfer (or pay in cash at a meeting).

We hope to have an online direct credit/debit card facility for you up here soon!

Any questions or comments?